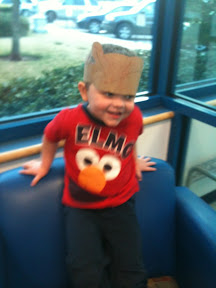 Zane is truly becoming such a big boy right in front of our eyes!

Zane has actually been sort of potty training for months now. The daycare can take way more credit for this than I could! We bought him a little potty a while back just to let him get used to the idea. He actually picked up pretty quickly. We didn't push anything but just took him in there if he asked and he went potty almost every time he sat on it. He thought it was really fun. Our biggest struggle was convincing him that it was time to be done and that we weren't going to play with everything in the bathroom.

At school, using the potty is part of the routine and it is what your friends are all doing so it's fun and cool. I love positive peer pressure! He has been going or at least trying fairly regularly at school for a long time now.

Since he had already been doing so well in his "pre-training," I thought it might be feasible to get him mostly potty trained before Taryn arrives. As much as I have dreaded this transition, I figured it would be easier now than when I am trying to nurse a newborn, so it was now or at least 6 months from now. So, a couple of weeks ago, we took the plunge and bought some cloth training pants, underwear, and pull-ups. There are different methodologies for doing this but I decided to kind of ease into it and just start trying to get him to go more regularly and see if we could keep his diapers pretty dry first. I have friends that have done the "boot camp" method where you just jump in immediately to underwear, don't leave the house, and take them every 15 mins for a couple of days until they've got it pretty well down. I didn't know that this method would go well for Zane's personality or mine. He tends to resist when I push him too hard. So, we started out in diapers just trying to get us all in the habit of thinking about going to the potty more regularly. I asked the school to push it a bit harder with him and take him at least once an hour. After a couple of days, his teacher encouraged me to bring up some underwear for him and let him try it. He might really like it and get the hang of it faster. This made me nervous, but I agreed.

I couldn't let the daycare have the first "underwear" experience with him without us there so we put on the underwear when we got home that evening to try them out. He kept them dry for quite a while and thought he was quite a big boy with his "unnerwears" on.

He has really done pretty well with it at school since then. Most days, he has about 1 or 2 accidents. We are still needing some work on #2 as well but he is making progress. We are trying to find the right balance between not pushing too hard but still being committed. In the evenings and weekends, we let him wear pull ups or diapers a little more if he wants to or we are going out and about. I've also learned that things work best if Zane thinks its his idea. :-) Example: "Do you need to go potty?" "No." "Okay. We will start the movie after Zane goes potty." "I go potty." "Good idea."

I think we are doing well so far. Hopefully, we will have it down pretty well by May. I expect that he will regress some after she is born, but at least the initial work will be done and we will all be used to the routine of it. Our diaper costs have already been significantly reduced but the underwear hasn't been cheap. I do find myself doing a lot more laundry too!

We are so proud of our big boy! Check back soon for the next chronicle- The Big Boy Bed!