Zane's First Christmas Morning
This Christmas has been a lot of fun with Zane, yet very stressful and odd at the same time. Let me start by saying that I have basically been sick since about December 3, sometimes getting a little better but never fully, and then it hits full strength again. I started with a bacterial upper respiratory infection with a sore throat and some sinus congestion, started feeling better with antibiotics, but then started getting some major head congestion 5 days into the antibiotics. I am pretty sure I caught a virus while still recovering from my infection. Somewhere in there Zane got sick too, I guess about the 17th. With a sick baby and a full time job with no spare time off, it is pretty difficult for a sick Mommy to get enough rest to get better. Zane seems to be feeling better than he did, but he still has a pretty nasty cough. He was out of daycare for an entire week. Since Friday afternoon, I am feeling about as bad as I have at any of the worst points of it this month, with about the worst stuffy nose I have ever had and a lingering cough. All of this made the preparations for Christmas very difficult and stressful for me. We barely managed to get all our Christmas presents bought between last Saturday and Tuesday, the 22nd. It worked to my favor that we are having a pretty scaled down Christmas this year anyway because of our financial constraints from having Zane this year. Despite all of that, we managed to have a great Christmas Eve and Christmas Day with Zane.

On Christmas Eve, I had to work until 2pm (like I said, no spare time off!), then it was a whirlwind of trying to get together last minute presents and wrapping and getting ourselves together to be at Tommy's parents' home before 5pm. Did I mention that it started snowing?! We spent a little time over there as his mother's family, the Wallace clan, began gathering for our traditional Christmas Eve together. Everyone was a bit slower in gathering than usual because of the bizzare snow storm that had hit! We slipped out for a bit in the middle to attend our church's annual Christmas Eve service. Tommy had never been to the Christmas Eve service since he has always been with his family, and I haven't been in 7 years! Pops (my dad) really wanted us to be there because he wanted us to help him light the final advent candle with him as each staff member had lit one candle with their families. It was a wonderful time of reflection and celebration as we considered the significance of Christ's birth in our lives. Zane did great for the lighting of the candle and then fell asleep on Daddy's lap by about the 3rd carol as he had missed his late afternoon nap in all of the running around. It was fun to attend as a family. We are still trying to figure out a way to work this in to our typical Christmas traditions every year (or at least some years). After the service, we returned to Mimi & Papa Bear's house to spend more time with the Wallaces. Zane crashed at about 8:15, so exhausted that he didn't even want to eat his last feeding of the day. We had a good time with the family, watching all the kids play and adoring the new babies that came this year (3 total on that side, Zane, Noah, and Tommy's cousin's baby girl- Aurie). Then, home late to finish wrapping gifts! Did I mention that I didn't get enough sleep this week? Family Picture on Christmas Eve
Fun Fact- We got engaged in front of this very tree 6 years ago
With snow still covering the ground, this was the first white Christmas in the Metroplex that I ever had. Christmas morning arrived a bit earlier than it has in previous years. Zane woke us up at 6:30am to start the day. Even Zane looks pretty tired in the pictures. After Zane had his breakfast, we opened gifts as a family. It was fun to start a new tradition, gathering around the tree to see what Santa brought and then take turns opening presents. I am sure it will get even more fun in the years to come. 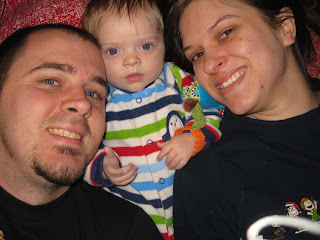 The 3 of us on Christmas morning
After our small family Christmas time, we made a brief stop to see Gigi & Pops (my parents) so that they could see Zane on his first Christmas before they headed to Dripping Springs to see my brother and sister-in-law. They were so happy to see Zane in his cute Santa hat and he took a great interest in their Christmas tree. Then, back to Mimi & Papa Bear's house to open presents with Tommy's immediate family and his dad's side of the family. This was a much smaller gathering than Christmas Eve as Tommy's dad has a smaller family and Tommy's Aunt Nancy was not even there because she was sick. Zane and his cousin Noah had a great time opening presents (rather watching presents being opened) on their first Christmas and then they both went down for a much-needed nap while we ate Christmas lunch. And, at that, the festivities for this weekend were over and we actually had nothing planned and nowhere that we needed to be. Odd, but we have been grateful for some down time. 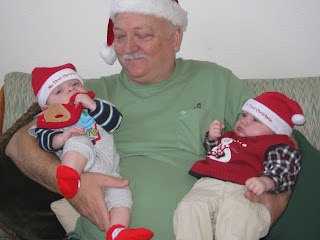 Zane (3 mos) & cousin Noah (2 mos) with Papa Bear
I say odd because we would typically be spending the rest of Christmas day and then a day or two after with my family. That is kind of how we have worked things the last few years. This has been anything but a typical year in my family, however! With everyone having babies, our holidays have been a little off-track. We were not all able to get together at Thanksgiving because my brother, Robin, and his wife, Jill, had just welcomed their 2nd child, Foster, a week before Thanksgiving. They were obviously not ready to make a big trip from Tulsa and we could not all be together there because my other brother, Craig, and his wife, Fallon, could not travel because she was 8 months pregnant. For Christmas, we decided to wait to get together until Fallon has baby Lylah Belle, expected any day now (due Jan. 6). If we had all traveled to the Austin area this weekend, it would have been pretty difficult for Robin & Jill to pack up their preschooler and newborn and make the trip again, not to mention difficult for us with Zane, after she comes, so it may have been months before they were able to make the trip to meet her. So, the Curry family Christmas is on hold for now and we are playing it by ear. I think we are all hopeful (most of all Fallon) that she will come sometime this week so that we can all go out there over New Year's. I am really missing my family right now but I am very excited that next time we are together, we will be 2 larger than we were the last time we were all together (just after Zane was born).

The rest of this weekend has been one of recouperation and enjoying new things. I have designated this weekend as my "sick days" since I haven't been able to take one from work since I first got sick, so I am forcing myself to keep it low key. Zane has received so many presents already! He has been enjoying some of his new toys and taking long naps.

Check out Zane discovering how to work a new toy from MeMaw & Great-Pops (Tommy's grandparents):
View our complete Christmas photo album on Facebook with this link. You do not have to be a facebook member to view it.
http://www.facebook.com/album.php?aid=2027672&id=152601048&l=3b55efc542

Merry Christmas to you and yours!