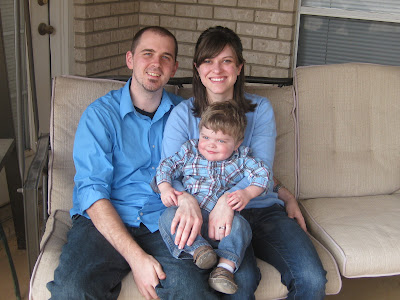 It was time to update! This is our most recent family picture taken about a month ago, right before Zane turned 18 months old. Look at that mop head! I forgot how badly he needed a haircut. (We buzzed it pretty short soon after that!)

18 months was such a big milestone for me. I just can't believe we are halfway through the second year already. I still want to look at him as barely 1, but now we are closer to 2! He is walking, running, dancing, talking, and playing like the BUSY toddler boy he is!

We have said bye-bye to the paci now completely. This was a big step of faith for all of us! We had cut back significantly earlier in the year, but relapsed when Zane had the flu in February. We essentially had to start from scratch to wean him off, but did it completely this time, just after he turned 18 months. He has been such a big boy about it! He barely cried the first night, cried a bit more the next couple of nights, but now he doesn't even ask about it. He did find one in the house the other day and we caused a major meltdown when we took it away. I feel like the only things we have left of "baby days" now are diapers and the crib. Everything else is completely different already!

Zane is so busy! He is earning the nickname "Hurricane Zane" because you can walk through our house and see exactly where he has been, leaving a path of destruction in his wake. He would much rather play with the keys or wallet he can barely reach on the dresser than the zillions of toys he has on the ground. He has learned how to open the doors in our house now, including the front, back, and door to the garage! This is scary! We are learning to always, ALWAYS lock the outside doors.

Zane LOVES to be outside! It doesn't matter what he is doing there, he just wants to be outside.
We have been trying to take advantage of the nice weather and spend time in the backyard every evening and go to the park as often as we can. Zane loves the slides, but he makes it very clear that he does not want to get on the swing.

Zane is very opinionated, particularly about the things that he does not want or like. "Zane, do you want more chicken?" "No, no" in a very cute, but determined voice while he shakes his head.

His favorite phrase is "Oh NO!" He thinks it is what you say when something hits the floor. He often throws things down and then looks up and says "Oh No!" He will keep repeating it until you say it back. We haven't gotten through to them that it's not "oh no" when you do it on purpose. :-)

He is very silly. He loves to put buckets on his head and gets to belly laughing at silly things that Daddy (or occasionally Mommy) will do. Tonight he got to laughing about the 5 little monkeys jumping on the bed. He kept hitting his head with his hand and saying "Ow" and then belly laughing! He is so funny!

His health has been okay. We have continued to struggle with sinus infections and wheezing that just doesn't want to clear for days and weeks. His pediatrician told me that he just has a bad respiratory system and we just have to hope that it gets better as he grows. His doctors have decided to keep him on antibiotics through the end of April to try to clear up and prevent those stubborn sinus infections. He started with a runny nose and cough again earlier this week but he has seemed to keep it from getting worse or getting too wheezy with it so far. Maybe the antibiotics and nasal spray are helping this time! Keep praying for his respiratory system. He is such a happy guy when he does feel well!

I can't believe how fast he is growing! He will be 2 before we know it!