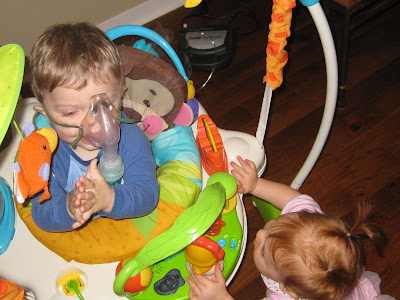 Zane enduring a breathing treatment at Lylah's house
Many of our friends and family know that Zane has not been the healthiest of little boys! Basically since he started day care we have had one issue after another. For several months, our basic cycle was: stuffy nose becomes cough, cough becomes wheeze, wheeze gets worse, ear infection, repeat every 2-4 weeks. After about 6 ear infections, Zane got tubes in his ears in July. We were very hopeful that this would really clear up everything. It did cut out the ear infections, but the rest of the cycle pretty much stayed the same.
He also kept getting flares of eczema that we attributed to food allergies and broke out in hives one day after eating food off my tray at Genghis Grill. Because of that, combined with the wheezing, we saw an Allergy & Asthma specialist at the end of July. Turns out, Zane's allergic to eggs (and has skin irritation with certain citrusy fruits). This doctor also added another maintenance med to Zane's wheezing treatments.
At the end of August, Zane's wheezing flared up, probably because of Orange O-zone days when it was so hot. We got it back under control in just a few days, in time for Zane's birthday. The next week, Zane's birthday week, we started him on whole milk. Within days, his asthma was the worst I have ever seen it. We had one horrible night where he woke up every 4 hours or less, short of breath, crying, and coughing until we did a breathing treatment that subsided the symptoms long enough for him to get back to sleep. At that point, we switched to soy milk immediately. Since that week, we have yet to get Zane's asthma completely under control again. Runny noses have come and gone but the wheezing and coughing stick around. Last week, we took him back to the pediatrician and they doubled one of his maintenance meds, put him on 5 days of oral steroids, and referred us to see a pediatric pulmonologist (lung specialist) the very next day. Luckily, the pulmonologist is at Cook Children's, where I work, so I feel pretty comfortable there and it is quite convenient for us.
The pulmonologist took Zane's history and a chest x-ray and said that he would call this asthma (or an asthma-like condition :-)). He believes that Zane most likely has intermittent asthma that is triggered primarily by respiratory viruses and infections and he is hopeful that eventually we will be able to cut the maintenance meds out completely and just treat flare-ups. He gave us a new plan and an after-hours number for the pulmonologist on-call (this may eliminate some ER time!) and told us to continue the 5 days of steroids unless he cleared up before then. When we completed the steroids and Zane didn't seem to be better than he was to begin with, I called the pulmonologist back. They had me take him for a sinus x-ray and, sure enough, the poor little guy had a sinus infection. I am pretty sure he had that for at least a week and a half prior because he had little yellow goop draining from his eyes but no runny nose for at least that long. They put him on antibiotics for 3 weeks! Since starting them, he had a lot of drainage for the first few days and that has slowed down now but he still has a horrible cough and his wheezing has been worse than before. I just want to get my little boy well! I am pretty sure it has been at least a month since he has really felt good.
It doesn't slow him down much though! We are still chasing our little guy all over the house, whether he is wheezing or not. He is about to eat us out of house and home too! Yesterday, I heated up 3 frozen burritos for lunch. Zane ate 1 3/4 and I only got 1 1/4. He also ate some apple slices and drank most of his milk. I'm telling you the kid can eat! I am just glad that he has been more willing to try new foods lately.
We are hopeful for better, healthier days to come. Respiratory season makes me nervous but it does look like he can probably get the flu shot so that helps! We are trusting God to take care of our little boy. Thank you to all our friends and family for the prayers, support and helpful suggestions.