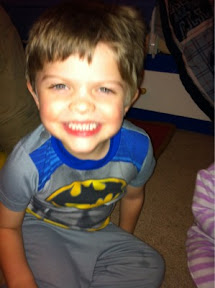 Zane is officially 3 1/2 this past week, somewhere between February 28 and March 1. :-) This just seems impossible to me! I thought I should record what makes Zane Zane at 3 1/2 because I know too well that he is changing all the time!

Zane's favorite things:
Superheroes!- Almost any superhero will do but his favorite right now is probably Thor. He has 2 Thor hammers that his daddy made him out of cardboard and duct tape and they are both completely dilapidated. He still runs around the house with them saying, "Thor Asgard!!" which is his interpretation of the catch phrase "For Asgard!" He also loves the other Avengers, the Justice League, and Spider-Man. Everyday he must wear a superhero shirt or he is very unhappy, even pajamas. He also likes the PBS show SuperWhy about kid superheroes who find answers to problems by reading books, and Veggie Tales "League of Incredible Vegetables" where all the veggie characters are superheroes.
Chicken nuggets- He would eat them every meal if we would let him. He is still a pretty picky eater so he won't eat a lot of the things we make for dinner. He eats a lot of bread and applesauce because I won't cook him something different from what we are having.
Friends- The apple does not fall far from the tree. He is very social and wants to see someone just about every day. If we are going somewhere, his first question is usually, "Who's going to be there?" His best friend is Casey from church but he plays very well with just about anyone once he gets comfortable. He also loves seeing his cousins. He really misses the ones that live far away.
His cowboy boots- Gigi & Pops gave him cowboy boots for his birthday. Thank goodness his feet haven't grown too much because he wears those things everywhere! So, you will usually see him in a superhero t-shirt with cowboy boots. Nothing says 3 year old boy more than cowboy boots with a t-shirt and athletic pants or shorts! I think it's precious!
"Tomorrow"- Zane is a little obsessed with tomorrow. Every day, all day, he asks us what we are doing "tomorrow," usually by just saying, "Tomorrow, we're...?" and waiting until I finish the sentence. I've been working with him on just asking me what we are doing. He wants to know what we're doing tomorrow and then what we are doing after nap tomorrow and what we are having for dinner and who will be there. It's a little exhausting for 2 laid back parents who don't always have much of a plan! If he could read, I would truly make him a calendar for the week so he could have the plan to look at himself.
Being the line leader- Our little guy is just a natural-born leader and often insists that we walk behind him in the house so he can be the line leader. He also loves to be the one to pray aloud for our meals or at bedtime and he is starting to "show" Taryn how to do certain things. He is definitely a firstborn.

Right now Zane is learning:
Imaginative play- Just in the last few weeks, I have been noticing a difference in the way he plays. He is playing more with his little action figures and his cars. They are having little conversations with each other and more elaborate storylines. It has been very cute!
Letters & numbers- He can recognize most letters now and will often point out certain ones if it is one they have studied at school or one he knows well, like Z for Zane! He also recognizes all the numbers 1-9, and can count to at least 14 or 15 before he starts skipping around.
Independence- This isn't a new thing but he still gets more independent each day! He can put on his own pants, socks, and shoes. He can get himself a cup from the dishwasher and get water from the fridge. He is learning to bathe himself with some good guidance. Sometimes, he tries to be a little too independent and I will catch him with his step stool trying to get something down that he shouldn't have or needs help to get. He has tried to pour his own juice and get his own ketchup until I intervened.
To Express Emotions- As a social worker, this one stands out to me! Zane is starting to learn more words for his emotions. It's hard to keep a straight face when he says, "Mommy, that made me mad! I'm very fustrated right now!" I'm trying hard to affirm him for using his words, even if the source of his anger is not really appropriate. It's so much better than screaming or hitting!

Things I love about Zane right now:
Zane-isms- There are some things that Zane does and says that just make me smile right now. If he eats something he likes, he will say, "Mmm, TASTE," instead of yummy or tasty. He is also trying to participate in conversation more, so he will ask us around the dinner table, "Daddy, did you have fun at work today?" "Mommy, how was your day?" It is very sweet.
Complementary words & affection- Zane is also very open with affection and complements. He tells us at least once a day, "Daddy/Mommy, you're my best friend!" He will also tell me I look like a princess if I put on a pretty dress. He loves to give hugs and kisses. Sometimes, one of us will be about to walk out the door and he will come running and say, "Wait! I want to give you another kiss!" Even if you are running really late, you just have to stop for that!
Big brother- Zane is such a sweet big brother to Taryn. He makes her laugh more than anyone else, just by jumping up and down or running around. He loves for her to be with him and he loves to give her hugs and kisses. We have to be careful though, because he is just so intense, and his hug will knock her over. He is still not so happy about sharing his toys with her though. I can't wait to watch their bond continue to grow!

Zane is just growing so fast! He is such a ball of energy. I'm so glad I get the privilege of being his mother! It is such a huge job but I just know that God has some great plans for my little take-charge superhero! Prayers are much appreciated!


- Posted using BlogPress from my iPhone