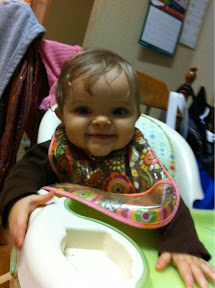 Since I skipped Taryn's 7 month post (oops!), I thought I might do a combined 7 mos & Christmas blog.

At 7 months, Taryn is very curious, active, and playful. She is usually happy if someone is giving her attention and more likely to be fussy if we aren't. It's been a little harder to get things done around the house during the day because she is really wanting that direct attention more and more. She started sitting up on her own in early December and has really enjoyed this new way to view and interact with the world. She grabs everything in reach and wants to play with it and put it in her mouth. She loves to babble and laugh and play. She will reach for someone if she wants them to hold her and will still go to almost anyone unless she is having a particularly clingy day with mommy. She is still doing well with baby food and we have started trying a few mushy table foods. Oh, 2 little teeth have popped through her bottom gums!
We finally got her completely well at about the second week of December but she got another cold right before Christmas and is back to coughing and breathing treatments again. Zane had the flu last week and we are just so glad he recovered quickly and she never got it!

For Christmas, we spent Christmas Eve with Tommy's mom's extended family at Tommy's sister's house in Arlington. We had a great time with cousins! We woke up at our house Christmas Day to see what Santa brought and open our own family gifts. Zane got a Captain America shield from Santa and a new Thor hammer from Daddy and he was in Superhero heaven! Taryn was mostly just happy with the wrapping paper and boxes.

We met Tommy's parents and sister over at his grandparents' house for brunch and presents. We were so pleased that Tommy's Pops was feeling well and was able to join us in the living room and watch the kids open presents. After that, we took the party to Tommy's parents' house for more presents and lunch. Then it snowed!!
We decided to delay our travel plans because of the weather. Instead of hitting the road after lunch, we waited until the next morning to head to Tulsa for a quick trip to have Christmas with my parents and my oldest brother's family. Zane had such a blast with his cousins but he sure did miss Lylah! We have one small Christmas left this weekend when we go see my other brother near Austin. 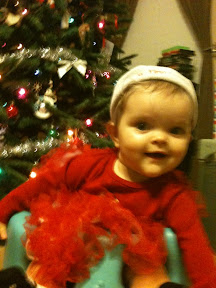 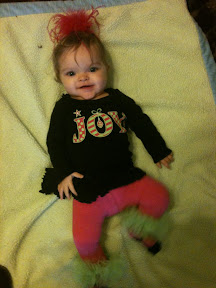 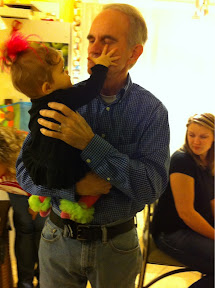 On Christmas Eve with her Great-Uncle Clay. She knew he was a pawpaw! 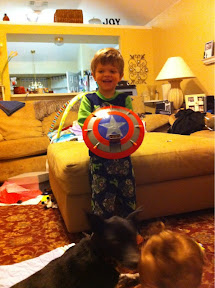 With his Captain America shield from Santa! 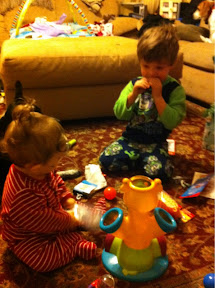 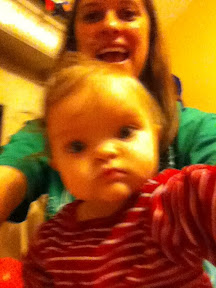 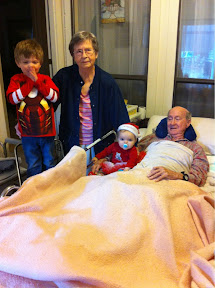 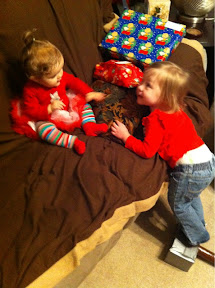 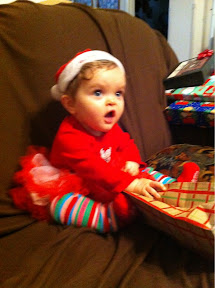 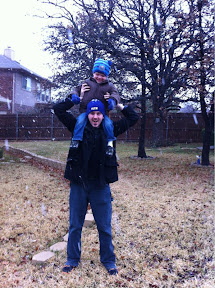 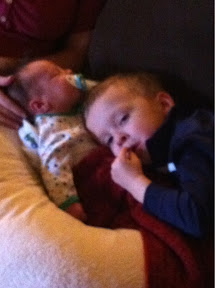 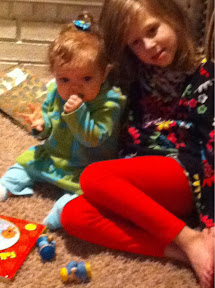 Taryn with her cousin Emma 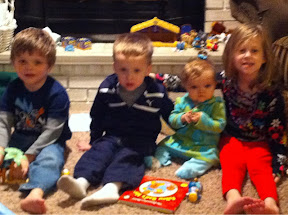 What a great Christmas it has been with these two! As Zane would say, "Bye! Happy Holiday!"